There are few better ways to celebrate facts than to read a book full of them.So for International Fact-Checking Day, here’s a list of the books that I’ve read, are still on my bookshelves, or were recommended to me. Tweet additional recommendations with the hashtags #FactCheckIt and #FactCheckBooks so anyone following International Fact-Checking Day on Twitter can spot them. Because this is 2018 and we’re a team of millennials, I’ve also designed a set of emoji-based ratings to give you a sense of what to expect.

The bulb-o-meter flags books that are thought-provoking

Books I didn’t get much out of get a

Shruggie comes out when I haven’t read the book yet. I’ll point to reviews, though

Before becoming the top reporter on the fake news beat, Craig Silverman was a corrections fanatic. In this 2007 book, he catalogued hundreds of media corrections, drawing lessons on how errors come about and how to avoid them. Neither the indictment his subtitle suggests nor the absolution the media doesn’t deserve, this is a great history of a fundamental media practice.

Graves is essentially the sociologist of the American fact-checking movement. In his book, the University of Wisconsin assistant professor compiled a history of political fact-checking in the United States — warts and all. The book is strongest in highlighting some of the tensions central to fact-checking in practice (literalism vs contextualism, the non-immutability of facts) but also offers a thesis of this form of journalism as a reform movement. Poynter ran a Q&A with the author in September 2016.

The Trouble with Reality: A Rumination on Moral Panic in Our Time

This 87-page booklet by the legendary host of On the Media on NPR is a pacey essay rich with thoughtful nuggets and historical context. It concludes that without a shared pool of knowledge, we’re in trouble — but that a renewed search for the truth and facts (good journalism, some might say) is a way out. Poynter ran a Q&A with the author in May 2017.

This is an exhaustive history of all a-factual strains of American civil society, from the fanatically religious to the Disney-obsessive, from the alien believers to the Red-scared. Andersen tackles Trump as a symptom not a cause of a larger American fascination with the fantastical over the factual — and even then only starting on page 416. The book touches on seemingly every fantastical strain of American history, from European settlers to Oprah Winfrey, from anti-vaxxers to Farmville addicts. “America was created by true believers and passionate dreamers, by hucksters and their suckers” he writes. And it’s a compelling case.

A no-nonsense guide to ex ante fact-checking from the former head of fact-checking at The New York Times Magazine. This is not consumer-oriented, but a helpful set of tips to have on your desk if you’re a reporter about to send your big piece to publication.

The Death of Expertise: The Campaign Against Established Knowledge and Why it Matters

“The United States is now a country obsessed with the worship of its own ignorance,” Tom Nichols writes on page one of his preface — and he doesn’t tread any lighter in the rest of the book. The book describes and decries the erosion of the authority usually offered to those with knowledge in education, social media and journalism, warning that it is a threat to American democracy itself. Poynter ran a Q&A with the author in February 2017.

The (Honest) Truth About Dishonesty

A witty and irreverent book collecting several experiments that behavioral economist Dan Ariely has conducted over the years. He summarizes what does and doesn’t affect our likelihood of acting dishonestly in the graph below, taken from page 245. Ariely also starred in a Netflix documentary essentially based on this book, but I did not find it as compelling. 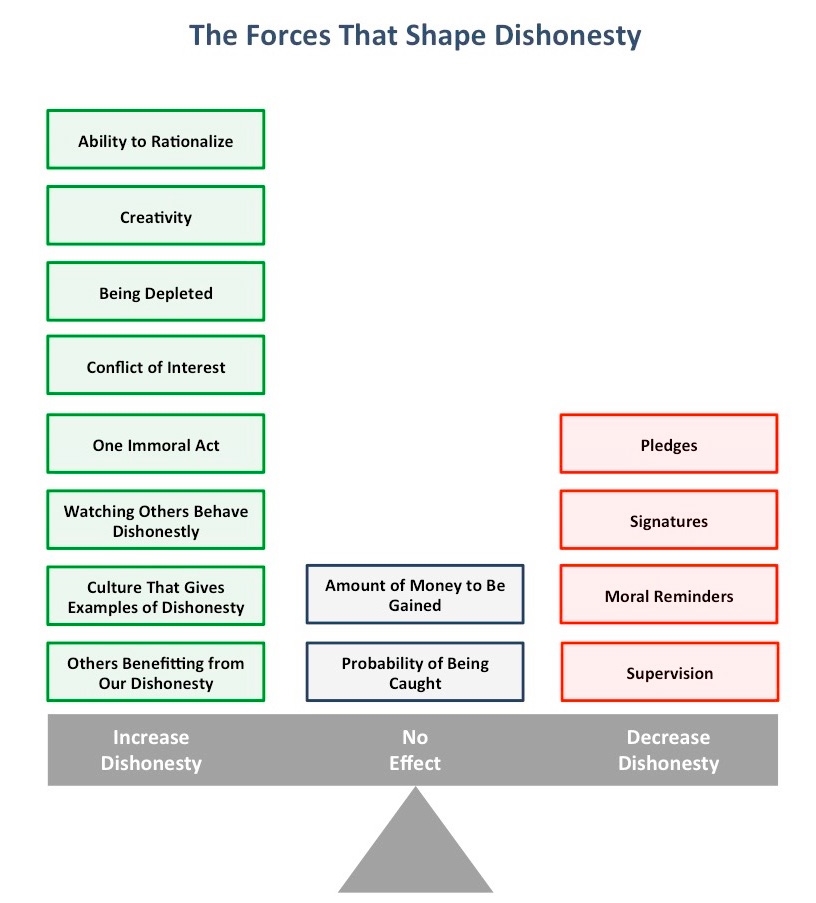 Everybody Lies: big data, new data, and what the internet can tell us about who we really are

This is an overview of how social science should be revolutionized by big data more than a treatise on lying (for that, see above). It is most useful in challenging the reliability of current surveys, arguing they can be hampered by the social desirability bias (i.e. the desire to appear better than we are) and that Google searches might offer a complement to get to the truth. It is stuffed with fascinating and scary examples gleaned from the major tech platforms’ data and practices.

The Lifespan of a Fact

Read this book if you want to really indulge your inner nerd and get lost in the minutiae of confirming a fact. It is literally the transcription of the back-and-forth between author and the fact-checker of a 2003 magazine essay. This one isn’t for the casual fact-checker.

Post-Truth: Why We Have Reached Peak Bullshit and What We Can Do About It

I probably had preconceptions when picking up this book, because of its title. But my expectations weren’t surpassed. Overall, it is little more than a hodgepodge of random thoughts and wishful thinking. There are a few interesting vignettes but for a summary of where we’re at, James Ball’s “Post-Truth” iteration (see below) is preferable.

Post-Truth: How Bullshit Conquered the World

This is a book about bullshit in the Harry Frankfurt conception, more than about “post-truth.” Especially in the section that surveys the spreaders of B.S., it is a useful explanation of how we got here and what the problem is for the uninitiated. The book’s solutions may not all be novel or effective, but they can provide the starting point for a classroom discussion. And as a former correspondent at BuzzFeed U.K., Ball understands the ecosystem better than most.

Weaponized Lies: How to Think Critically in the Post-Truth Era

This is a basic primer, probably best for high school students. A few real-life and recent examples of botched facts means it a good one for simple case studies. Helpfully, Levitin strays out of politics and well into marketing as a reminder that lies are all around us.

This one’s in Italian. Even more than the book above, it clearly targets teenagers. But it does so in a clear and engaging manner at a time when students should be fluent with the main terms and practices of online disinformation. Disclaimer: I wrote the afterword for this one.

You Are Not So Smart: Why You Have Too Many Friends on Facebook, Why Your Memory Is Mostly Fiction, and 46 Other Ways You're Deluding Yourself

Sure, this book is a bit gimmicky, but if we all internalized even just the first five words of the title, we’d probably be better off. McRaney surfaces lots of useful studies that deserve to be looked at in further detail — even if in order to be divulgative he sometimes exaggerates their significance. Still, the bottom line is that we can be a part of the problem even when we think we are part of the solution. And that’s a good lesson to keep in mind.

The Righteous Mind: Why Good People Are Divided by Politics and Religion

I confess I read this so long ago that I wouldn’t be able to separate what’s actually in this extremely influential book from how it’s been interpreted. So while I guiltily stare at it on my “unread” shelf, here’s a review from PolitiFact Editor Angie Holan.

The Chicago Guide to Fact-Checking

I have flipped through this book but never sat down to read it in its entirety. It appears very much in the mold of the “The Fact-Checkers’ Bible,” reviewed further up.

Tampa Bay Times Chairman and CEO Paul Tash dropped by my desk a few weeks ago and asked me whether I had read this book. I had not. Annoyed at being caught unprepared, I bought it. Here’s hoping Tash doesn’t show up until I’ve read it. NPR reviewed it here.

Post-Truth: The New War on Truth and How to Fight Back

When I find the stomach to read another book with “Post-Truth” in the title, this book is up. Meanwhile, it’s been reviewed by The Guardian here.

But What If We're Wrong?: Thinking About the Present As If It Were the Past

“Question everything” seems to be the mantra of this book, whose front cover is published upside down. Here’s a review by The New York Times.

This is the other one I’m most embarrassed not to have finished yet. But I’m getting there, I promise. Especially as this textbook seems likely to deserve a $nerd $nerd $nerd review. Thorson was interviewed by Vox.

Being Wrong: Adventures in the Margin of Error

Nonsense: The Power of Not Knowing

I bought these two books because they promise a good dissection of why we ought to remember that even the most fact-obsessive among us conduct a life of errors. And that’s OK. Here’s a review of “Being Wrong” by The New York Times and a review of “Nonsense” by The Washington Post.

The rise of political lying

These two books seem particularly fitting for — and indeed were recommended to me by — political fact-checkers. Read a review of the first on The Washington Post and the second on The Guardian.

Several more recommendations were made to me on Twitter. Here’s a few:

In German: https://t.co/G9CbvwQ4uY (the author is my PhD supervisor)

Republic by @CassSunstein is kind of relevant. Also Public Opinion by Walter Lippmann

"Blur: How to Know What's True in an Age of Information Overload," by Bill Kovach and Tom Rosenstiel. https://t.co/JgXaNnxTtY

UnSpun: Finding Facts in a World of Disinformation

Alex, although it is written in Korean, why don't you add this book, too? This is the book that I gave you last year at GlobalFact4? pic.twitter.com/s6lFga1paF

Good morning! Awesome list. I checked it against @ithacalibrary's holdings and added a few: https://t.co/0Og0Tcy63f

Nice list! It includes some of our favorites. Here are some more. pic.twitter.com/6t8ZTGwvIP